The role of Cell Danger Response in chronic illness: what are the emerging solutions? 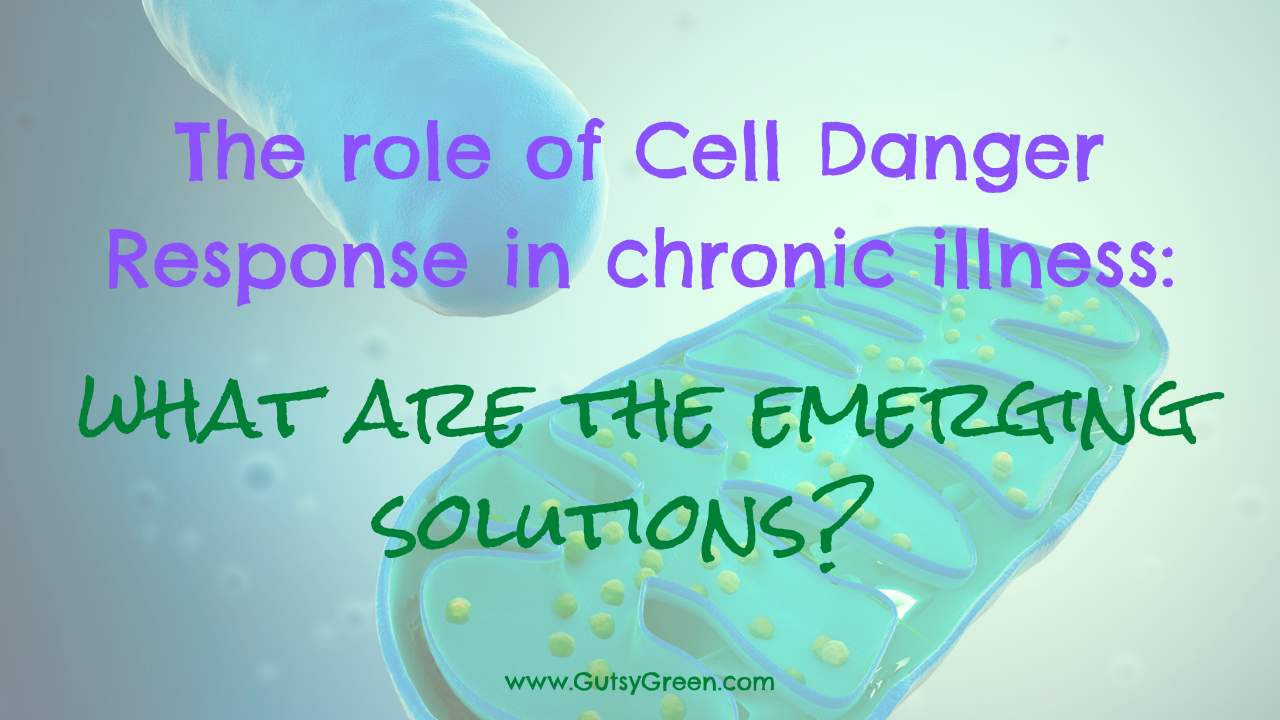 Our mitochondria are the body’s cellular energy factories. They produce a molecule called ATP (Adenosine Triphosphate), which our bodies use to power movement. In fact, everything from our heartbeat to our muscle movements depend on an adequate supply of ATP being generated by the Mitochondria. They are responsible for producing about 40 – 100% of your body weight in ATP every single day. 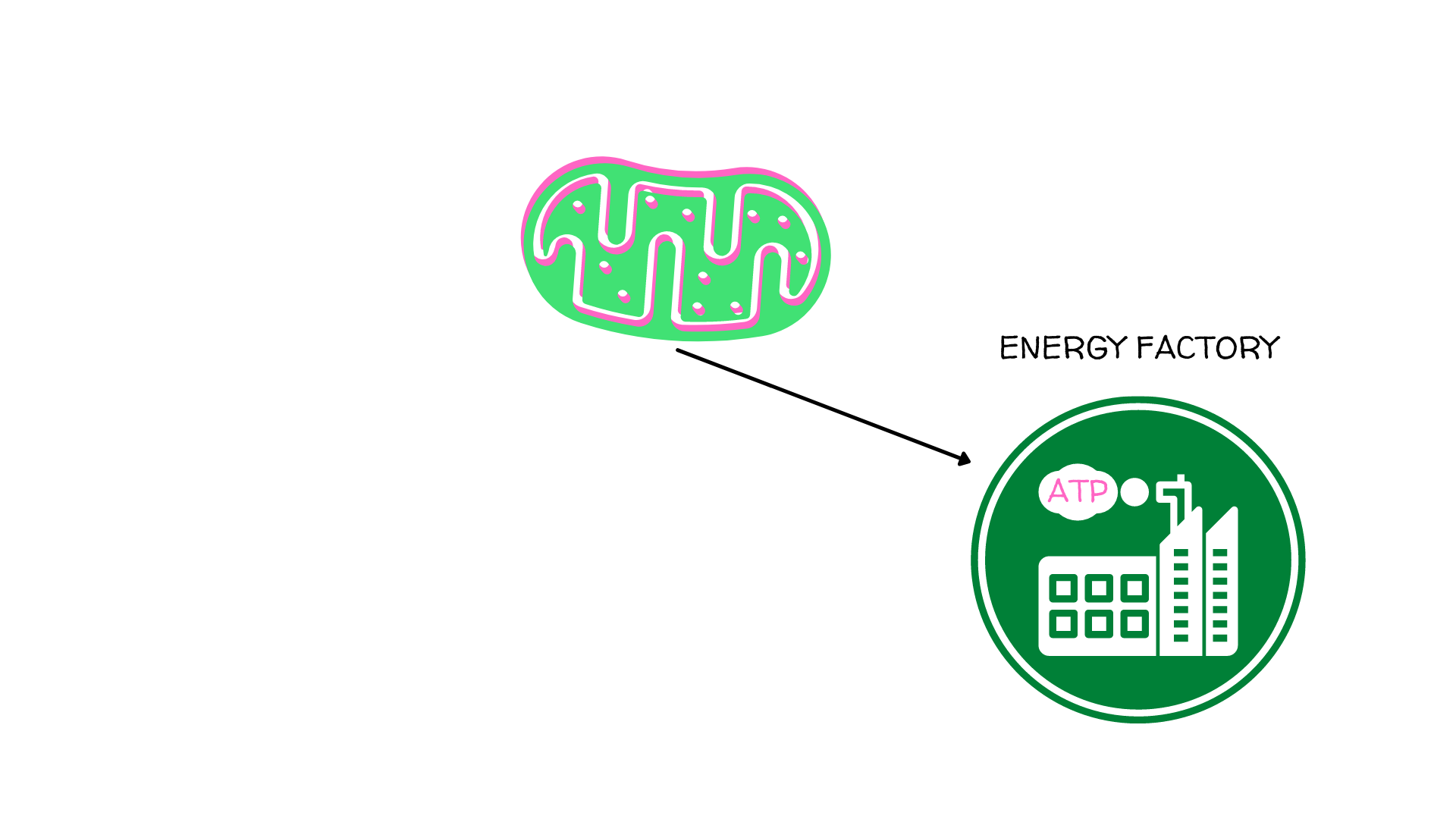 The pivotal role of the mitochondria is demonstrated by their ubiquitous nature in the human body; they exist in multitudes within every single kind of cell, with the exception of Red Blood Cells. They’re most highly concentrated in the brain and the heart (these organs are so important, that they need an extra supply of energy). While most cells have between 1,000 and 10,000 mitochondria per cell, the documented range is from 100 to up to 2,000,000 per cell! The most important cells have the highest concentrations, with the eyes, brain, and heart containing around 10,000 mitochondria per cell, and the liver containing around 2,000 per cell.

Some scientists estimate that the mitochondria in the human body collectively house as much potential energy as a lightning bolt! Likewise, mitochondria have an electric field strength of 30 million volts, which is equivalent to a lightning bolt… or 2.5 million car batteries. 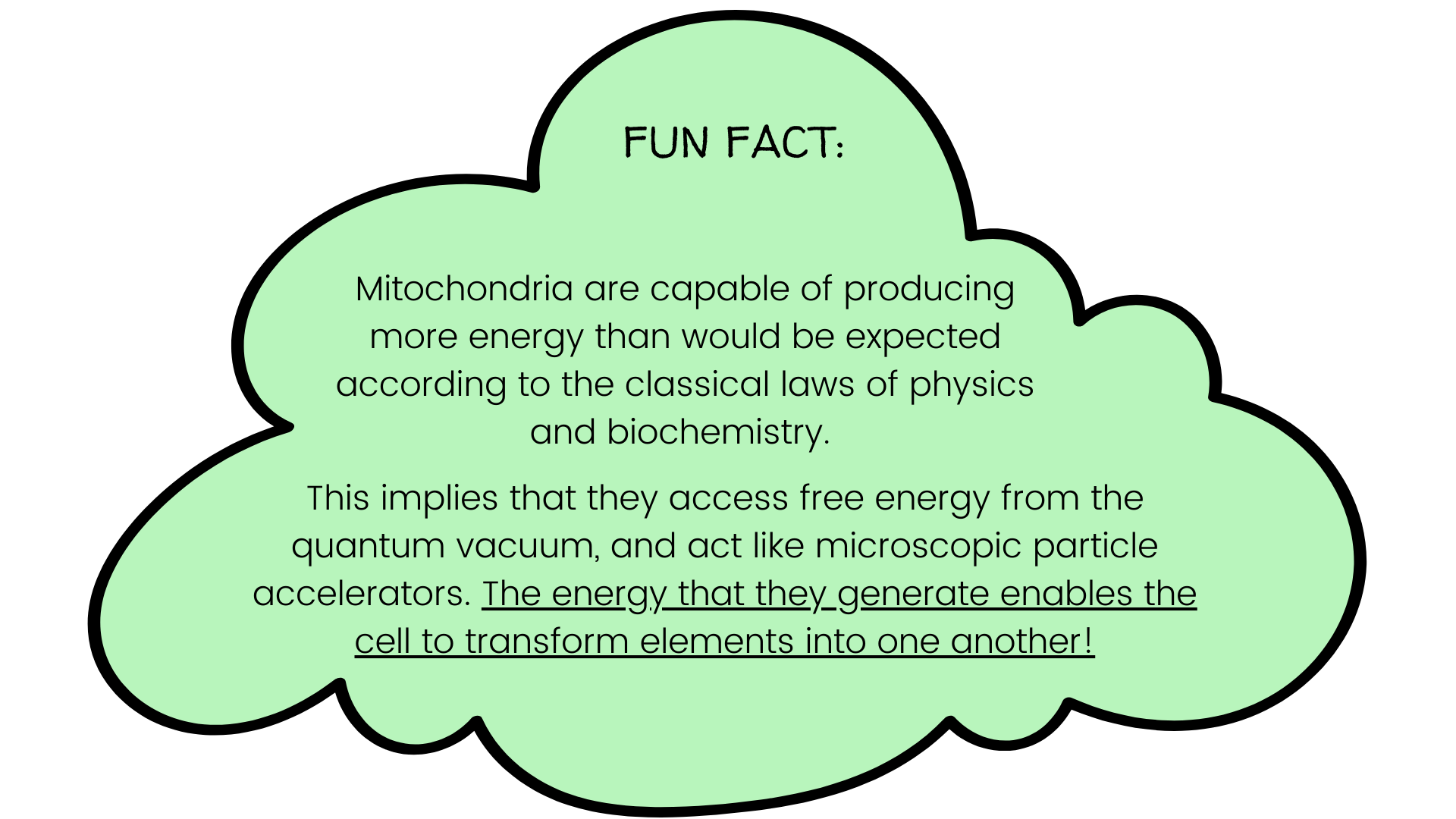 Mitochondrial are key to healing and healing disease.

When cells become unable to communicate with neighboring or distant cells, they also become stranded and cannot reintegrate back into normal tissue and organ function. They become functionally lost to the tissue, even when they are surrounded by a normal mosaic of differentiated cells.

This produces two outcomes, depending on the stage of life it occurs:

In short, blocked communication and miscommunication inhibit progress in the healing cycle, which prevents normal energy, information, and resource coordination with other organ systems.

The two modes of mitochondria.

Both mitochondria and ATP can perform metabolic and defense roles in the body.

Mitochondria are in “energy” mode when everything is healthy. But they can also go into a different defensive “battleship” mode that we refer to as Cell Danger Response (CDR). In CDR, they serve as the canaries in the coal mine that communicate with the body when something goes wrong. 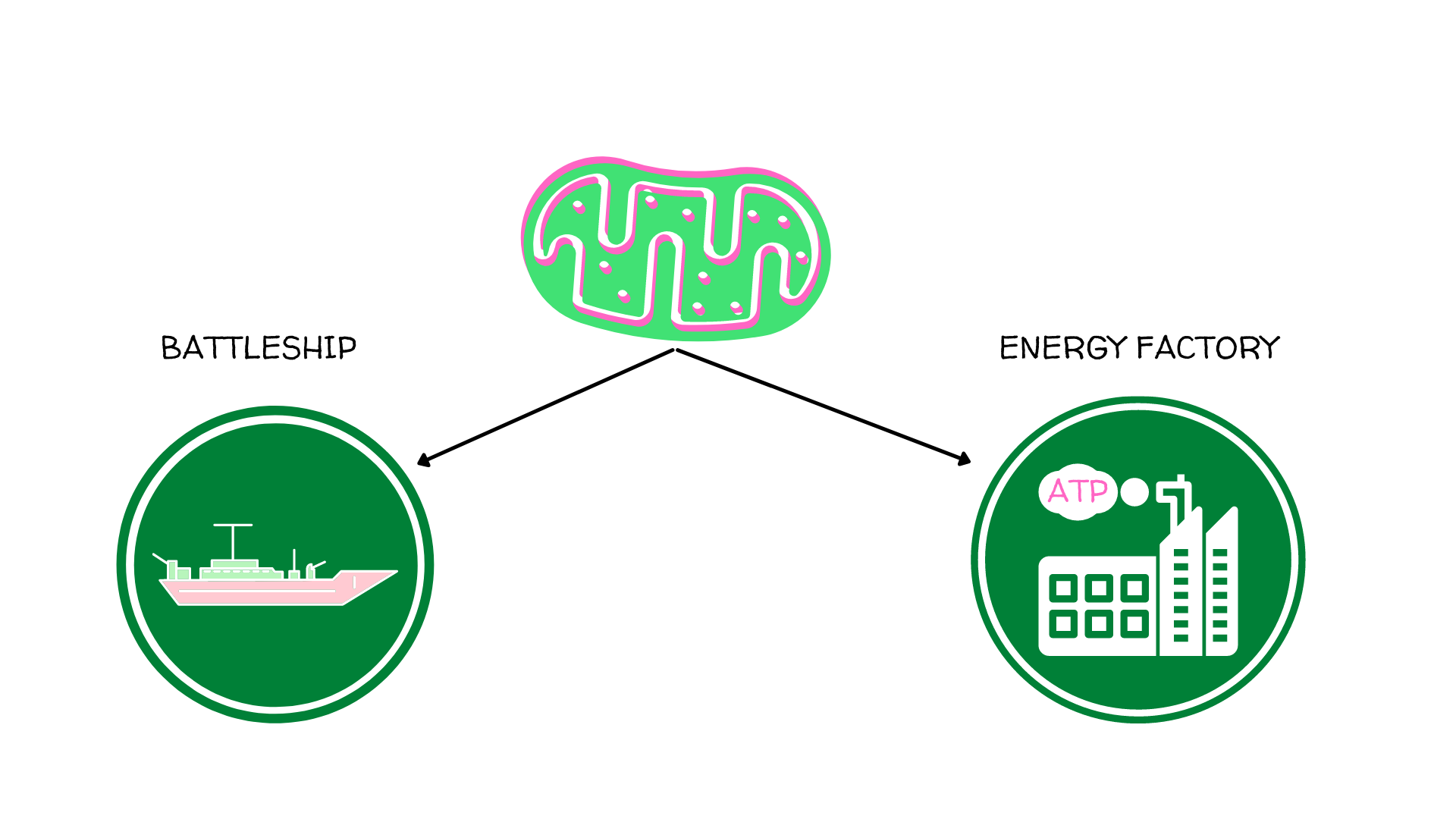 A stressed cell that meets with a toxin or pathogen will begin to leak ATP into the bloodstream. It is this extracellular ATP (which under normal circumstances is found only inside of the cell) that initiates the first phase of cell danger response. Then the mitochondria shut down energy production and scrambles outside of the cell to signal the immune system.

For example, imagine when you’re sick with the flu. Do you typically feel a lot of energy when this happens? Or are you fatigued? The reason you don’t have energy during these times of sickness is because your energy molecules, ATP, are leaving the cell and being used for immune instead of energy roles.

How healing can “get stuck”

The healing process is a dynamic circle that starts with injury and ends with recovery. This process becomes less efficient as we age, and the reason for this is because of Mitochondrial dysfunction.

A healthy healing cycle starts with wakeful activity (high cellular energy). But, inevitably, some kind of stressor will eventually trigger your Mitochondria to move into Cell Danger Response, of which there are three phases: Cell Danger Response 1 (CDR1), Cell Danger Response 2 (CDR2), and Cell Danger Response 3 (CDR3). After CDR3, your cells move back into healthy energy mode. Each stage of CDR is energetically and metabolically distinct and each has a checkpoint that must be met before the next stage is reached. Both local and systemic signals are used in the checkpoints. 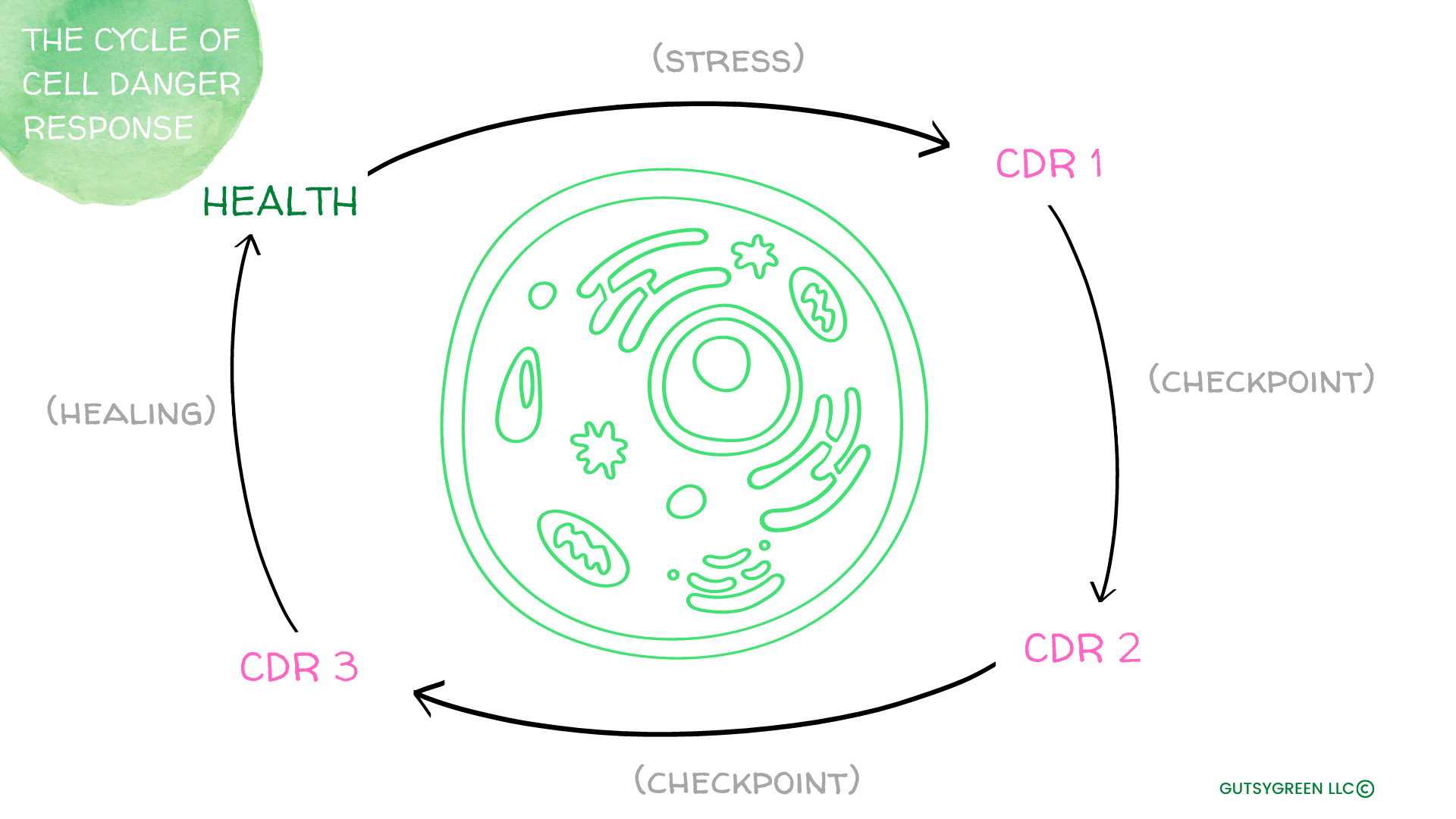 This cycle is obvious in the context of daily scrapes, cuts, etc. Say you start with a normal skin barrier on your knee, then one day when you’re rollerblading, you fall and scrape your knee, kicking off the Cell Danger Response cycle. Over the next few weeks you watch as your knee forms a scab, inflames around the tissue, then one day the scab falls off and you have a new, healthy skin barrier that has formed in its place. In the interim between the injury and the new tissue, your cells have cycled through Cell Danger Response in a normal, healthy way!

Now, say, like for many with chronic illness, you fall and get the scrape, but instead of this process taking a few weeks, it takes months. What’s happening here? Your cells are getting stuck in Cell Danger Response. What’s more, if this is happening for common scrapes and bruises, you can bet it’s also happening internally and is likely contributing to disease.

Under stress, the first stage of Cell Danger Response, CDR1, is when your mitochondria change from powerplants to battleships. They move from anti-inflammatory to proinflammatory and disconnect their cell-to-cell communications. Their oxygen consumption drops, and cellular energy switches to glycolysis and lactate production. Newly synthesized double stranded mitochondrial RNA is released into the Cytosol and helps to defend the cell during CDR1 by activating Type 1 Interferons (your immune artillery) and the body’s antiviral response.

The most common triggers for the cell entering CDR1 are: 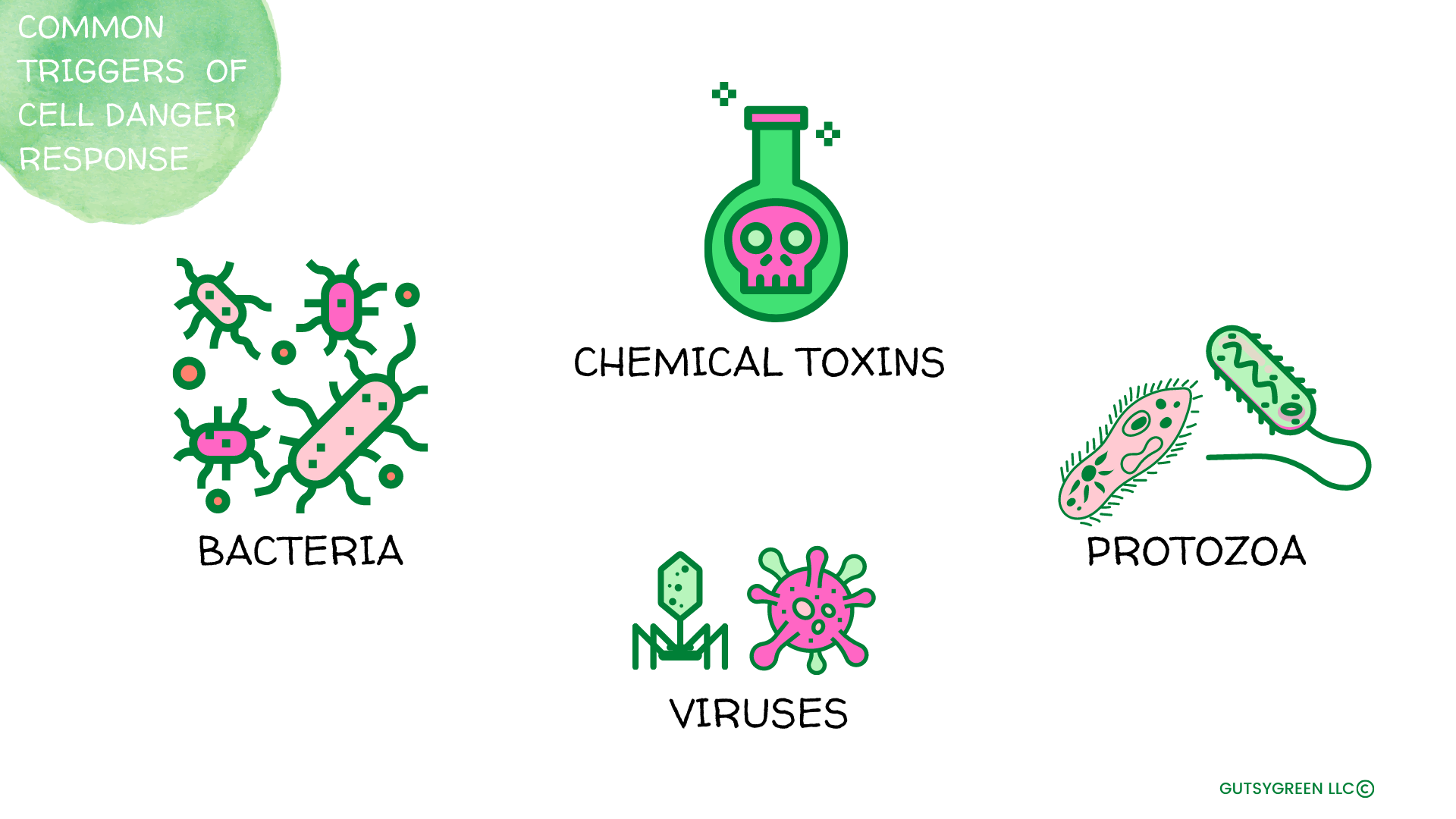 CDR1 is involved in:

Once the damage associated with the initial injury, infection or toxin has been cleared or contained in CDR1, the cells that were lost need to be replaced. Stem cells (present in all tissues throughout life) are recruited to replace the lost biomass. The mitochondria in stem cells facilitate aerobic glycolysis for polymer synthesis and cell growth.

However, dividing and migrating cells are unable to establish a long-term metabolic cooperation between cells because their location in the tissue is continuously changing. After the cells have stopped migrating and growing they can establish long term symbiotic relationships with neighboring cells that build physiologic reserve capacity, provide resistance to re-exposure to a similar environmental danger, and benefit the whole. 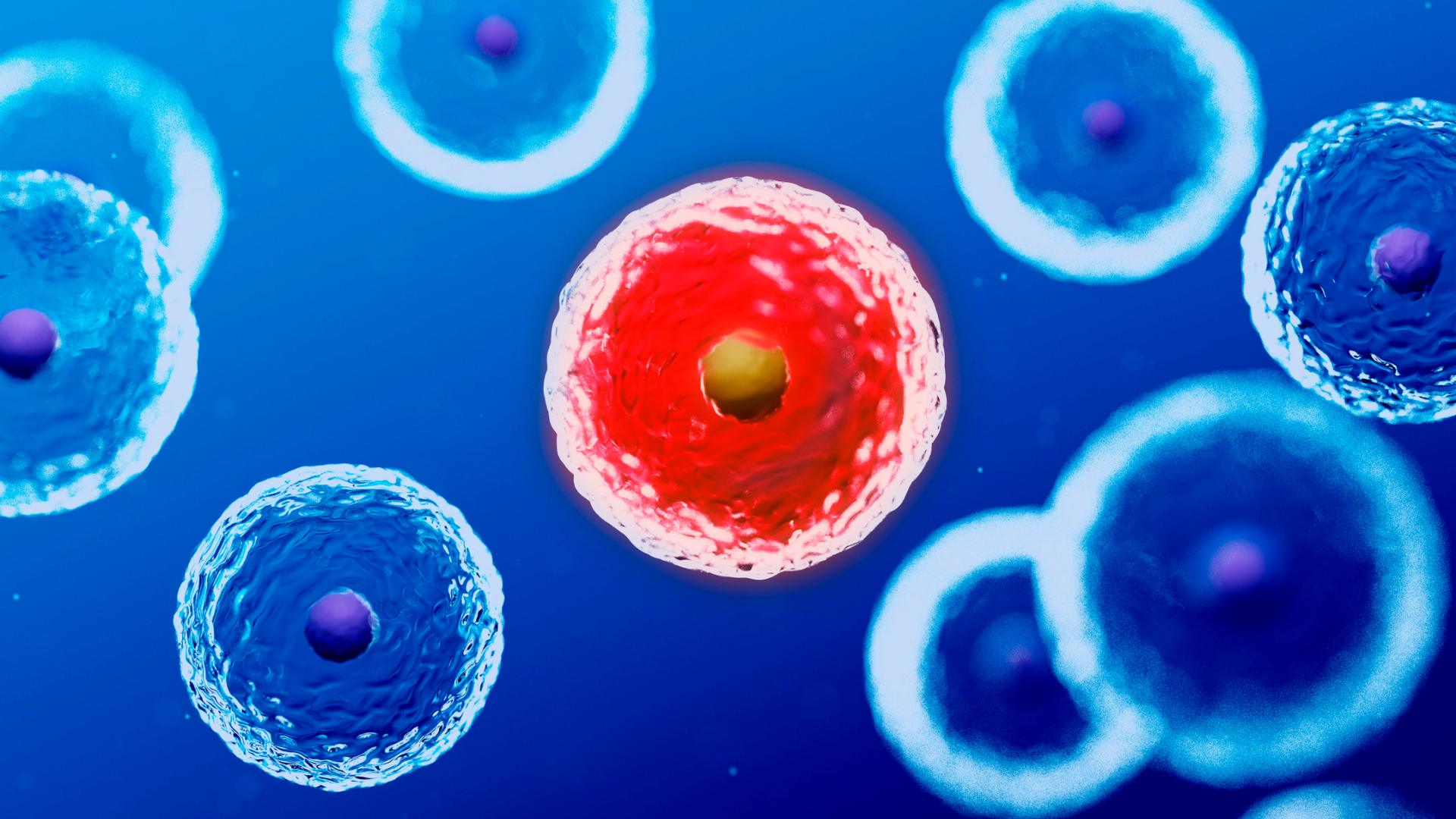 Once cells exit the cell cycle and establish durable cell-cell contacts through gap junctions and other structural connections, they can exit CDR2 and enter CDR3.

CDR2 is involved in:

In CDR3, cells finally stop dividing and establish cell-cell connections with their neighbors. Cells then undergo a process or cellular education; adjustments in gene expression, cell structure, and metabolism.

Mitochondria in CDR3 cells reestablish permanent access to oxygen and nutritional resources and connections with the autonomic nervous system and tissue lymphatics. All blood vessels and most tissues receive innervation from the sympathetic and parasympathetic nervous systems. 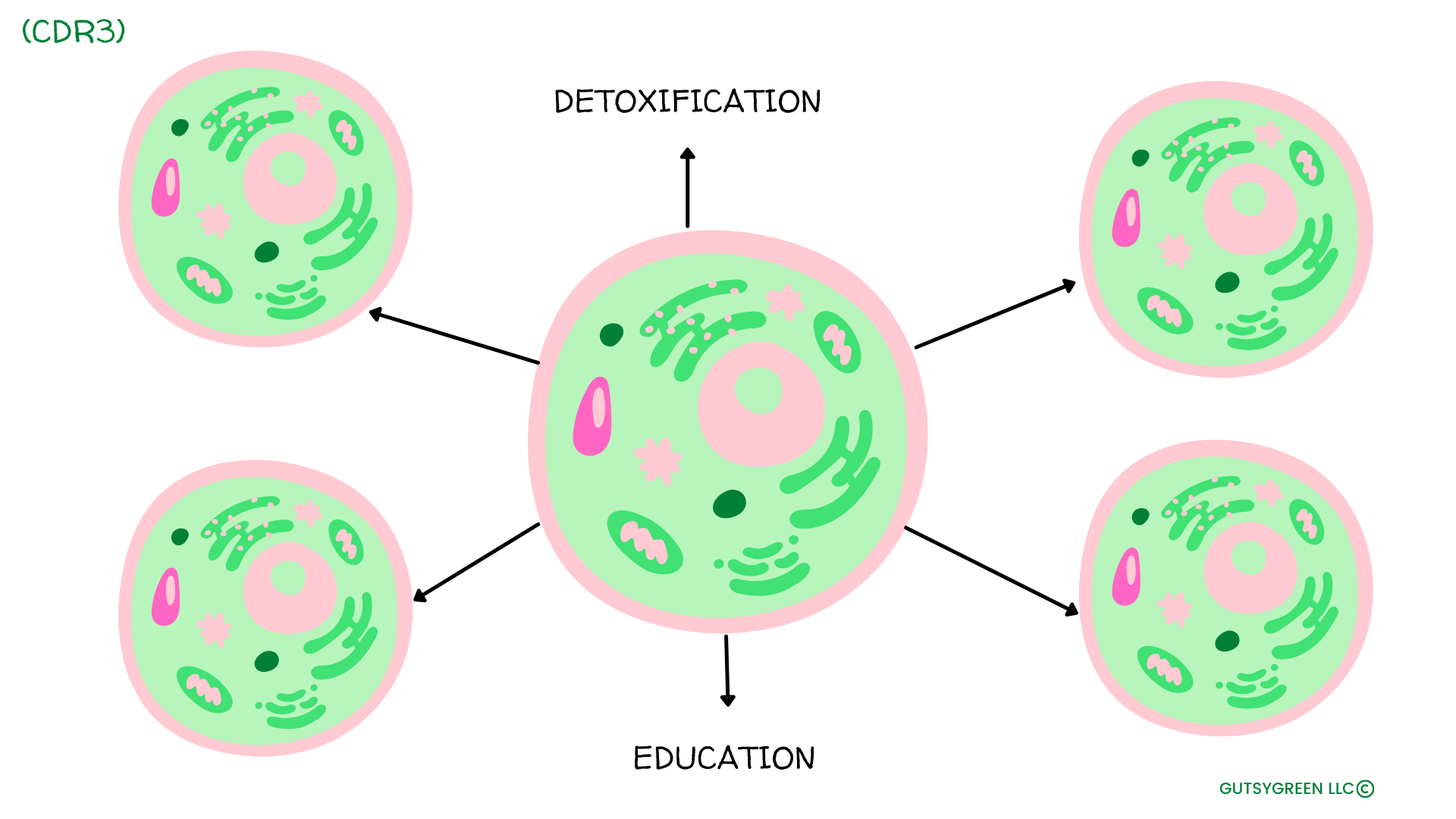 Metabolite and waste product removal helps to provide remote information to and from organs like the brain, liver, intestines, and kidney. Each of these organs participates in regulating whole body absorption, secretion, metabolism, function, and behavior according to chemical signals that are circulated in the blood.

Crucially, tissue specific detoxification restarts in CDR3 and continues through the health cycle.

Importantly, the path leading to healing and recovery is different from, and not the reverse of the path that led originally to the disease.

CDR3 is involved in:

Once the cell enters CDR3, it’s basically like saying “ok, it’s time to stop signaling the immune system now”. Many diseases and disorders are associated with problems in these signaling cascades. Cancer, for example, can occur when these signaling processes run amok and a cell keeps signaling other cells to keep funneling resources and feeding it. The cell is stuck in CDR and needs to remove what is blocking it from moving through the CDR healing cycle as normal.

Hormone production relies on intricate signaling cascades in the body and can thus be drastically reduced in CDR. This is one reason why hormonal problems are so common in those with chronic illness. Likewise, mitochondria ae responsible for producing the precursor to all steroid hormones, pregnenolone. The mitochondria convert cholesterol molecules into pregnenolone using an enzyme p450scc or CYP11A1. This is a rate limiting step in hormonal production, and often becomes a bottle neck when mitochondrial health is suboptimal.

CDR and the Nervous System

When mitochondria get stuck in CDR, it results in lower organ function. The order in which organs lose function will tend to happen in terms of priority.

As these organs shut down, this creates further problems from the body in terms of toxic overload, and susceptibility to viruses which damage mitochondria further. This works to exacerbate all the problems of the chronically ill person.

Supporting mitochondria is at the forefront of any commonsense approach to managing chronic illness. So how do we do it?

A 2-pronged approach is necessary:

As we discussed above, the most common mitochondrial stressors are bacteria, viruses, protozoa (parasites), and chemical toxins.

However, the order in which we attempt to remove these stressors is of the utmost importance. If we start in the wrong place, we waste time, and can potentially make things much worse for ourselves.

This is why I created the Mitochondria Mastery Map, which encapsulates the strategic process I move through with clients to help them efficiently remove their mitochondrial stressors serving as obstacles to their healing. 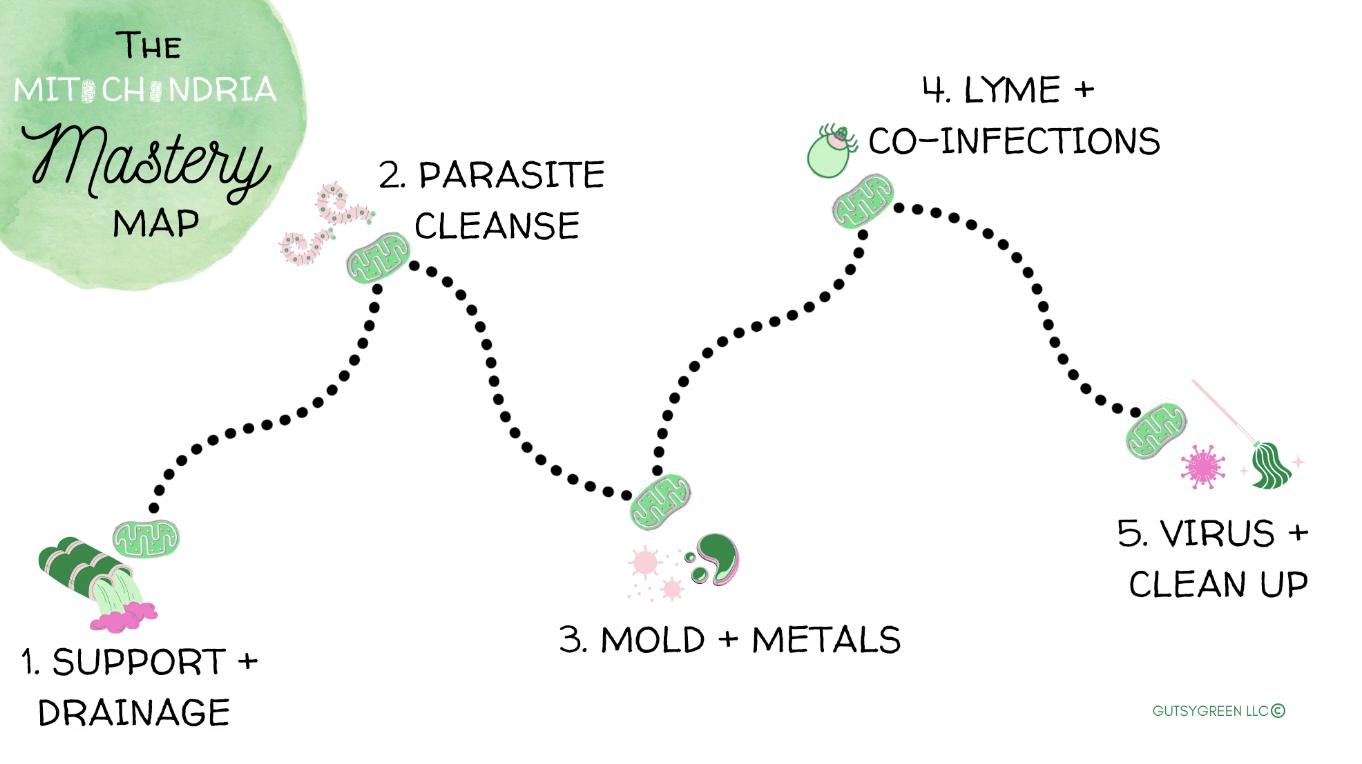 It’ll come as no surprise that modern lifestyles are grossly removed from many of the natural stimuli that our ancestors evolved with over millennia. While the physiological and emotional consequences of this are wide ranging, chief among them is a deleterious impact on our mitochondria.

While we don’t yet understand the complex array of variables that impact our cellular energy-makers, as we learn more and more about the recipe for mitochondrial optimization, it is apparent that this is synonymous with living a more ancestral lifestyle.

For example, these simple practices have been associated in literature with high mitochondrial function:

Beyond living a lifestyle that strives to incorporate all of these factors, we can also use targeted tools to give the mitochondria a kickstart back to life.

Some of my favorite ways to do this are with:

Complex chronic illness becomes decidedly less complex when viewed through the lens of the mitochondria.

While each person’s journey can decidedly vary, taking a mitochondria-centered approach to health will invariably improve your body’s cellular healing, working to rebalance dysfunction at the source rather than attacking downstream symptoms.

If you’re interested in working through the Mitochondria Mastery Map, consider these next steps:

The role of Cell Danger Response in chronic illness: what are the emerging solutions?
What's wrong with parasite tests? How stealth infections are making us sick.
The Map to Mitochondria Mastery 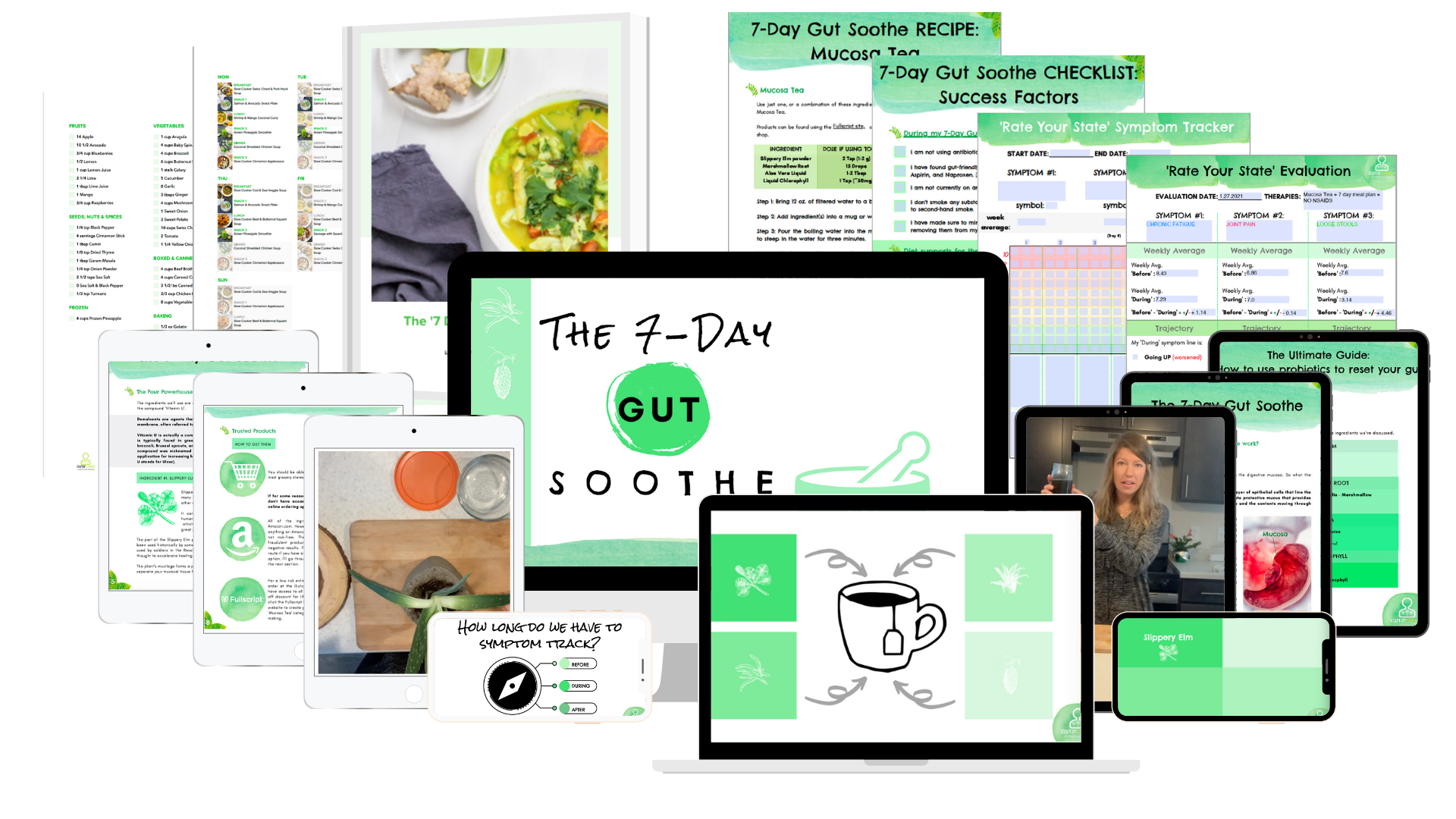 Ready to get started with an easy-peasy baby step? Get your digestive mucosa rebuilt and ready for action using this proven proprietary 1-week process.

Minimal cost, effort, and time for the incredible pay-off of increased resiliency. 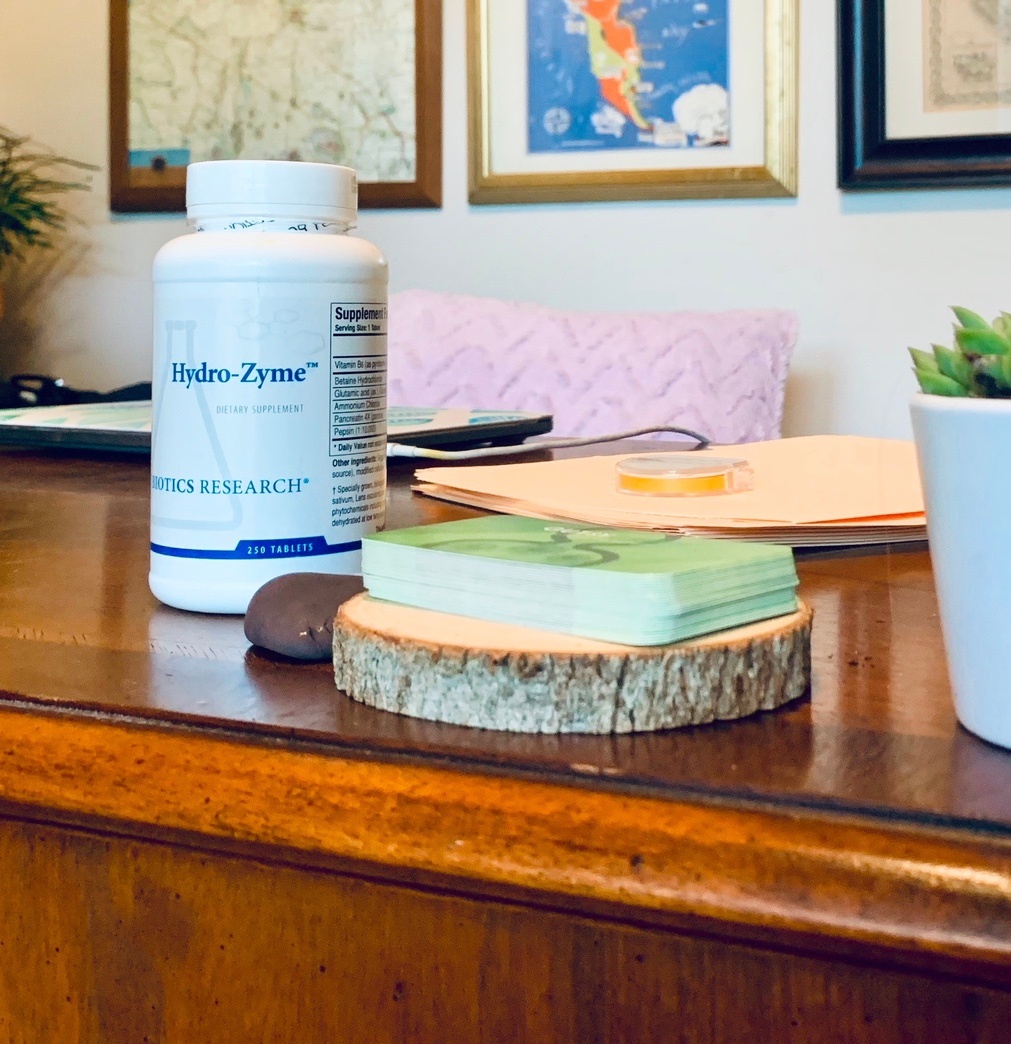 The free training is starting soon.